Home I discover Wine and cheese Cheese of Auvergne

Our most famous cheese, Saint-Nectaire

This delicious cheese with a hint of hazelnut is the king of Auvergne cheeses, and was already a favourite with Louis XIV! A non-baked cow’s milk cheese with compressed paste, it is made in the prairies over 1000 metres above sea level. It was the first Auvergne cheese to be given protected AOC status, in 1955. Today, it is one of the major origin-protected farmstead cheeses in France, both in terms of quantity and for the number of producers, even though the origin-protected region only includes 72 districts, between Puy-de-Dôme and Cantal on the Dore and Le Cézallier hills.

Just imagine, Cantal was already being savoured in Rome at the time of Pliny the Elder, in the first century AD… So this cheese really goes back a long way! Cantal is a non-baked cow’s milk cheese with compressed paste, with a cylindrical shape and weighing 35 to 45 kg. It can be made from raw or pasteurised milk (in dairies or on the farm). It can be tasted jeune (aged from 30 to 60 days), entre-deux (90 to 210 days) or vieux (minimum 240 days).
It has always been made in the Massif Central, and the production area extends over almost 600 000 hectares at the heart of Auvergne. This area is also known as “the green country” because of the green pastures where the cows graze.

The Auvergne Blue only originated in the 19th century. It is a cheese with a strong taste that was quickly adopted by Auvergne’s inhabitants. Today, it is mainly made in dairies.

To make Salers, some of the most stringent specifications in French cheese-making need to be respected. It can only be made on a farm, and the cows must be fed on grass in the pastures between 15 April and 15 September.

The mild and melting Fourme d’Ambert

This blue-veined cheese with a mild, melting taste is made on the hills of the Puy-de-Dôme department between 600 and 1600 metres above sea level, and was originally created in the neighbourhood of Ambert. 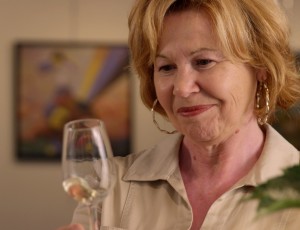 The wines of Auvergne

Wine in Auvergne?! Auvergne is a region of cheeses. Yes, but not only cheeses –...