Homepage I discover The blog Discover our treasures of Romanesque art in 1 day: the car tour 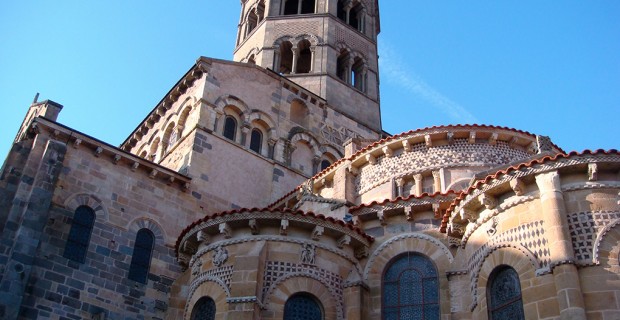 Romanesque art is to Auvergne what the Eiffel Tower is to Paris: a must-see! In the 12th and 13th centuries, Auvergne experienced a real spiritual and artistic effervescence. The Pays d’Issoire has many churches that have preserved all or a part of their Romanesque structure. Large, perched, isolated or even fortified, these churches bear the mark of the ground on which they were built.

To make sure you don’t miss any of these wonders, we offer you a one-day car tour to discover Romanesque art. Please note that the circuit is also accessible to campervans.

Step 1: The Abbey of Saint-Austremoine in Issoire

When entering the building, one is surprised by all these colours added in the 19th century. As one move forward, one quickly realize that the builders and sculptors have used all their talents and ingenuity for the choir. In particular, it is necessary to stop to contemplate the capitals representing the Easter cycle. Outside, at the apse, the proportions rise and overlap like a pyramid.

Here again, one remain admiring of the multiple decorations, the complex plan and the two-tone materials that blend together in perfect harmony. Finally, the 13th medallion that is part of the Zodiac on the radiant chapels remains a question mark… Let your imagination speak for itself!

Open every day from 8am to 7pm.

Step 2: The Chastel site in Saint-Floret 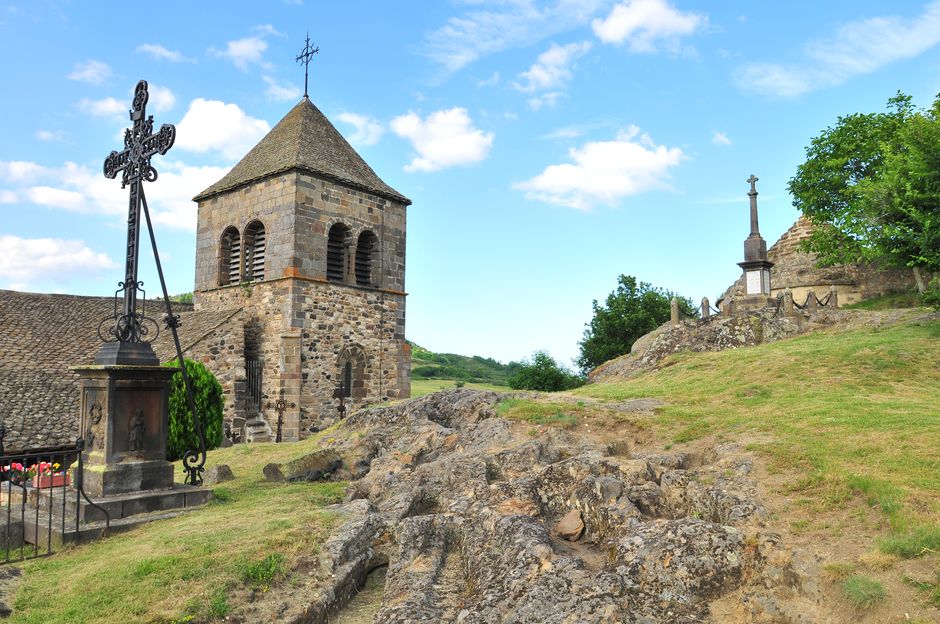 The Chastel site overlooks the beautiful village of Saint-Floret. The church stands in the middle of a unique archaeological site with anthropomorphic cave tombs (in human form) and an ossuary in conical form. These are the last testimonies of a very old place of settlement. The chapel is part of the tradition of the Romanesque rural churches of Auvergne, with massive proportions and small openings. The church also contains a remarkable fresco from the early 15th century representing the family of a lord of Saint-Floret as well as a 14th century virgin with a bird.

The inside of the church is visible in summer through a fence.

Continue your route up to Tourzel-ronzières at 8.5 km. Go to the place called “Ronzières”

A rich past, legends in which a saint faces a monster, where healing springs sprout… this place is more than mysterious. A strategic promontory, the remains of the Merovingian and Carolingian periods that have been found during excavations testify to an ancient settlement. When you come from far away, today, you can easily recognize Notre Dame de Ronzières thanks to its 19th century dome-shaped bell tower. The Romanesque apse of the building stands next to a 15th century vaulted portal sheltered by a 17th century porch. Inside, the smooth barrel vault and the cupola on squinches are characteristic elements of Auvergne Romanesque art. In one of the apses, the church houses a majestic 12th century Virgin in majesty. Church open all year.

At 4 km, continue driving towards Vodable. Go to the place called “Colamine” following the direction of Antoing on the D124, south of Vodable. 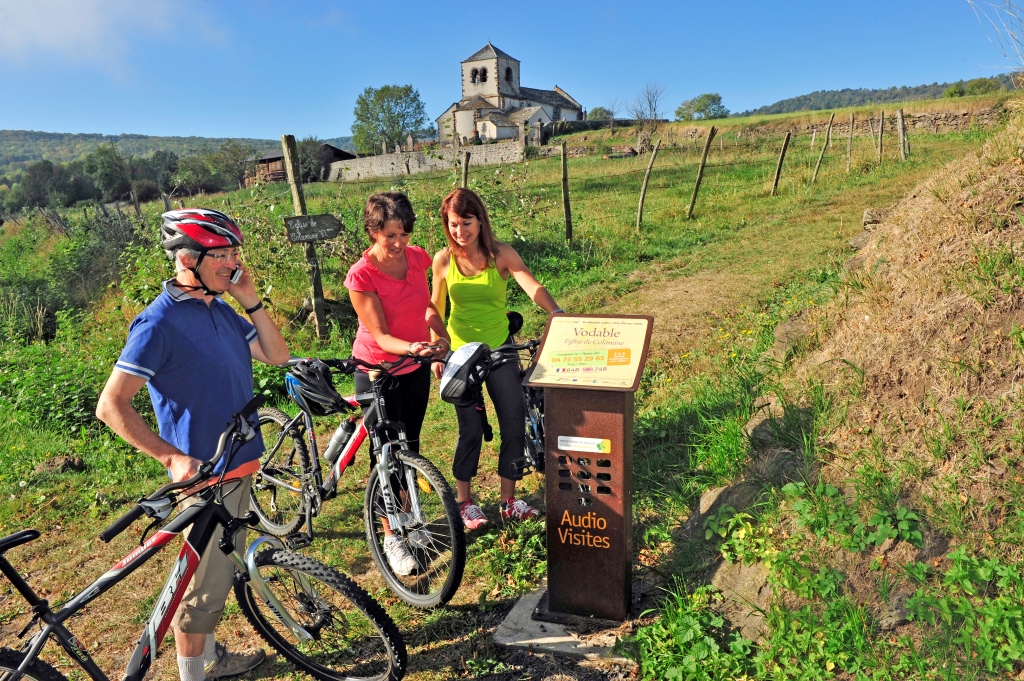 Lost in the middle of the countryside, built to withstand all winds, this is a typical example of Romanesque art. In 1979, during a restoration, an astonishing discovery was made: 6 statuettes hidden behind the altarpiece of the main altar, one of which was a Virgin in Majesty (visible in the church). The church of Colamine is part of the federation of Cluniac sites.

Open from mid-July to mid-August every day and on weekends and public holidays in June, July and August.

At 8 km, return to Vodable and follow the direction of Tourzel-Ronzières D124 and the place called “le Malnon”.

Another structure that is part of the Federation of Cluniac Sites. Since the beginning, this Cistercian abbey, intended for nuns, was built in this small valley at an altitude of 900 metres for its isolation. During the revolution, the abbey was sold as a national property and became an agricultural building until the church was bought in 1992. Today reduced to its transept and its choir with a flat apse, Megemont still has a very good look, with its pared-down architecture as Cistercian usage suggests.

Open on Sundays and public holidays from mid-June to the end of September from 2pm to 6pm.

At 6.5 km, follow the direction of Ardes-sur-Couze then the one of Dauzat-sur-Vodable.

In this small village of about a hundred inhabitants, Saint-Géraud church from the 12th and 13th centuries is nicely perched on its rock. Inside, the sculptures of the capitals, from the 13th century, show a transition between Romanesque and Gothic art with naturalistic representations specific to Gothic art and faces or masks that retain the fantastic caracteristics dear to the Roman style (grimaces, not very realistic).

9 km further continue on the D32, and then take the D48 towards Ternant and the D127 towards Saint-Hérent.

Off the beaten track, not very well-known, the chapel of Saint-Hérent is nevertheless a fascinating place. Located on a rocky spur, one reaches the chapel after a 10-minute walk. First one enters the cemetery, which follows the shape of the rock. At its end, below, in an inaccessible site, the local tradition says that there is a cave that would have welcomed Saint-Herem, a hermit from the 4th century. Then turn towards the Church of St. Clare, a Romanesque structure from the late 11th or early 12th century. During a recent restoration, a 16th century painted decoration was uncovered and revealed a Tetramorph, or Christ surrounded by the symbols of the four evangelists, including the magnificent winged Lion of Saint Mark.

The half-romanic, half-gothic church of Saint-Nicolas in Nonette has kept a splendid carved Romanesque portal. The nave also preserves Romanesque sculptures on the figurative corbeille, thus completing the bestiary of the western portal. The “beautiful god” inside is a superb marble bust from the end of the 14th century.

At 4 km, follow the D722 towards Orsonette, then the D123 towards Lamontgie, turn left on Mailhat. 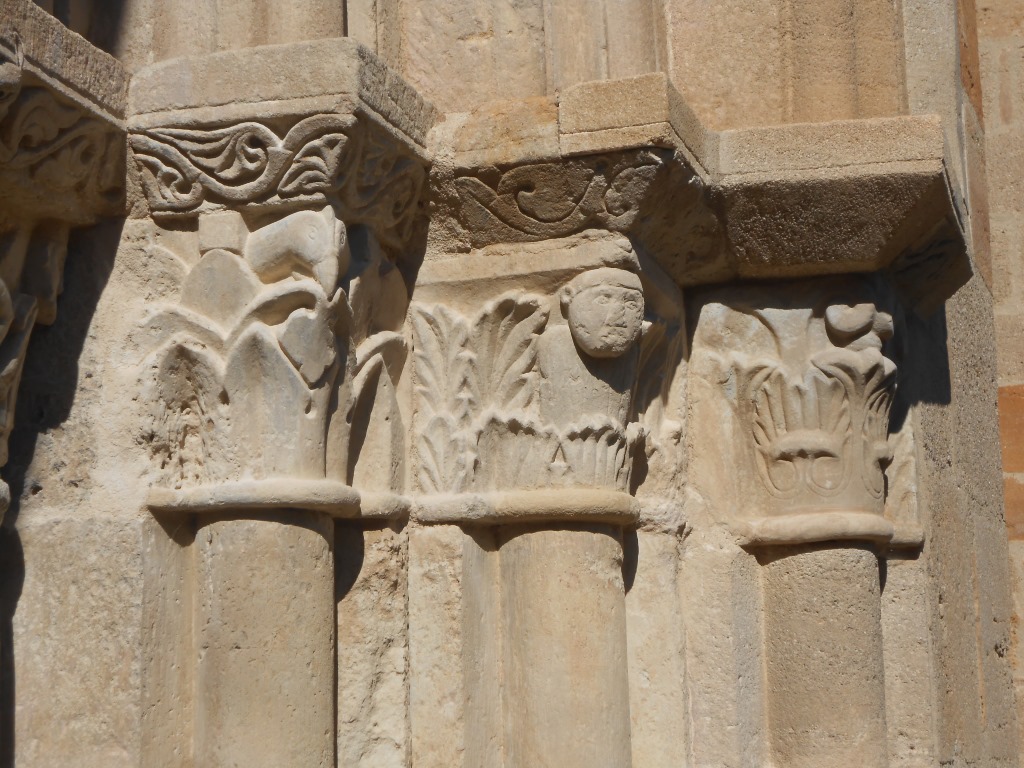 It is certainly the most charming of the small rural churches on the Issoire plain. Notre-Dame-de-Mailhat is very popular among Romanesque art lovers. The porch has surprising sculptures: the woman breastfeeding 2 snakes could be interpreted as a denunciation of lust while the man carrying a purse may warn us against greed. The style of the church, elegant and decorated, links it to the Romanesque art of Velay. Previously endowed with a rich polychrome wooden statuary, there are only a few elements left today, with the exception of a Virgin in Majesty, restored in the 1990s thanks to the association Les Amis de l’église de Mailhat.

Website member of the federation of Clunisian sites. Open all year round.

After 3.5km, take the D123 towards Lamontgie, then turn left onto the D214 towards Bansat. 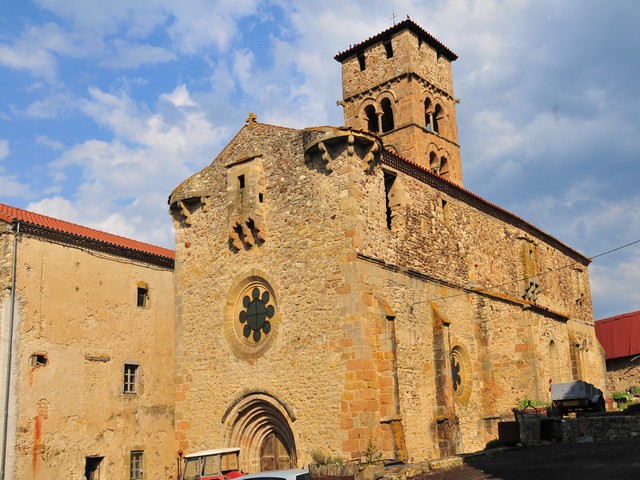 Last step, the church of Bansat is part of a fortified village. Its originality lies in the fact that it was fortified, probably in the 15th century. The nave features capitals simply carved with plants that contrast with the choir decorated with grimaceous faces or masks and crowned figures: one notices the transition between Romanesque and Gothic sculpture that moves from the imaginary world to a more realistic representation.